Review of "Maniac", Report on Stumptown, and More News

I’ve wanted to see Maniac ever since I saw a before-and-after shot of a woman being scalped in “The Bloody Best of Fangoria, Volume 1.” Oddly enough, that was in conjunction with then-editor “Uncle” Bob Martin’s article on why Fangoria prints disgusting pictures. What he said in 1982 still remains true today: when hanging out in a morgue, some of us just want to look under the sheets. I put off my viewing for several years. I was surely doomed to watch it alone on DVD because few others shared my enjoyment of grisly, (and often pointless to the story) practical special effects. Then I learned that Justin Giallo was going to present Maniac at Grindhouse Theater, a monthly event currently hosted at Tacoma’s Grand Theater. How could I resist a chance to see this film in its 35mm glory in a theater filled with my fellow sheet-peepers? And how marvelous that one of the sponsors would be “Fangoria Magazine?” The next morning, I showed up bleary-eyed at Norwescon. My friend (and fellow table vendor) Matt Youngmark, creator of Chooseomatic Books, asked for a report. I told him that if you enjoy old grindhouse films involving maniacs and nothing else, this one would be a classic choice. I also confessed that I wanted to see the original so that I could make an accurate comparison to the 2013 remake, starring Elijah Wood.

I drew this strip while Matt Youngmark and I were sharing yet another table at yet another convention. This time we were in Portland, Oregon doing combo deals at the Stumptown Comic Festival. I drew a lot of sketches in people's books. If you would like to see photos - go here.

There's lots more to tell you, but it will have to wait until tomorrow's post.
Posted by PooBahSpiel at 7:22 PM No comments:

Stumptown this Weekend in Portland, Oregon! 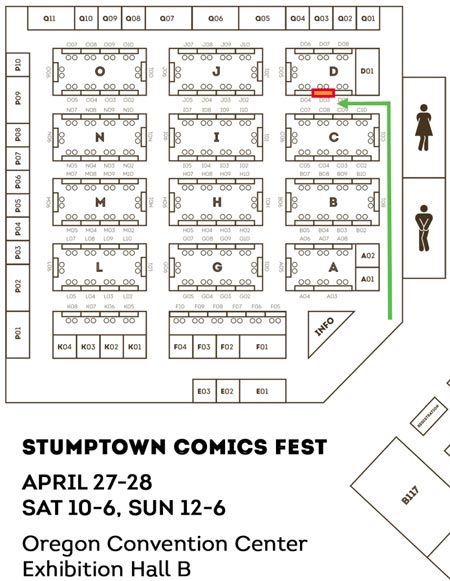 This weekend I will be participating at Stumptown at table D-03. Sharing my table will be Matt Youngmark, creator of Chooseomatic Books. Mat and I recently shared a table at Norwescon and it was such fun that we thought we'd do it again at Stumptown. If you haven't seen Matt's work before you definitely need to stop by and check out his choose your adventure books. Orientated for adults, fun for kids! Just like my book. In fact, ask Matt about the combo deals.
Posted by PooBahSpiel at 9:00 AM No comments:

When my friend John Draper asked me to see the premier showing of Oblivion, I couldn’t resist. I always get excited when I see that a movie is going to have robots in it, or spacesuits, or something that looks like a combination of the two. Normally a premier showing is held at 12:05 a.m., technically the day of the release, but still realistically pulling in that following evening’s audience. I was therefore surprised to see it scheduled at 8:10 p.m. on the day before its official release. I was also startled to see that the theater wasn’t nearly as full as I expected. In fact, there was ample room. While the story told in Oblivion finished with a fairly predictable ending (along some predictable routes), it did not go along the routes that I’d predicted. I was happy to get a few surprises thrown in. I think the reason I can’t go any higher than a seven on the rating is that Oblivion didn’t hold enough surprises for me. It had tension, action, sadness, and pluck. But it didn’t have the awe, guffaws, or big scares that would have thrown it up there with high-ranking, great sci-fi fantasy films. I should mention that while I give the movie a seven, my friend John gives it an eight.

Not to be confused with the Oblivion from 1994, starring George Takei - Oh, My!
Posted by PooBahSpiel at 1:43 PM No comments:

In case you missed the news story that inspired these two strips, here it is. Just a heads up that next weekend I'm going to be in Portland, Oregon selling my schlock at the Stumptown Comic Fest. I'll be sharing my table with Matt Youngmark of Chooseomatic Books. You will be able to find us at table D03. I'll be sharing the map as soon as it's released.
Posted by PooBahSpiel at 10:21 AM No comments:

Email ThisBlogThis!Share to TwitterShare to FacebookShare to Pinterest
Labels: 2013, Comic, Fest, Stumptown, The Return of Stickman

The unnerving story that inspired today's strip can be found here.
Posted by PooBahSpiel at 10:34 AM 1 comment:

The Comic Critic Reviews The Room

When I go to comic book conventions, I always ask my fans what their favorite films are. A lively discussion follows; we break movies down by genre and pick our favorites. And there is one genre of film that arouses the passions of masochists, the Bad Movie. Trying to define the Bad Movie is an evening’s discussion in itself. But for the purposes of today’s commentary, let’s go with this: a Bad Movie is one that strove to be a good, if not great movie, and failed to such a wretched degree that it’s easily considered to be one. And as this topic came up again and again, a movie title I’d never heard of before also came up. The name of that movie was—you guessed it—The Room. I’ve seen my share of awful films, mostly in my pursuit of seeing as many horror movies in the eighties as was humanly possible, but I’d never seen The Room. This one, having been released in 2006, is a relatively recent blight on cinematic art. I confess that my curiosity got the better of me, and I promised a fan I would watch and review the film. I expected that I might lose two hours of my life to the experience, but I hadn’t prepared for the anguish-inducing, soul-sucking, time-slowing, black-hole-of-waste that makes up The Room. If there is a hell for movie critics, this is what’s playing at every mandatory matinée.
Posted by PooBahSpiel at 9:17 AM 1 comment:

I'm very familiar with the biker mentality. I went on a visiting to my brother's friend in the hospital. His motorcycle was sideswiped by somebody shooting out a parking lot. The accident broke several bones along that side of his body, and he lost a few fingers. When we got to his room he told us all about the larger, better motorcycle money he was going to buy the insurance settlement.

Before people start sending me email telling me that I got the facts wrong, let me say that... Yes, I know it was not a chainsaw. Yes, I know that an EMT was just a few feet away and the first to respond. and also... This is a cartoon. A poorly drawn cartoon. And while at times it does a better job of reporting the news than Fox, it is still a comic strip that is inspired by the many odd events that happen in the world. Something I hope my copy editor will finally accept. There is no need to fact check this strip. I know what the problem is. You all care too much. Thanks for caring. Keeping those inspiring articles coming.
Posted by PooBahSpiel at 11:13 AM No comments:

Email ThisBlogThis!Share to TwitterShare to FacebookShare to Pinterest
Labels: #1472, #1473, chainsaw, The Return of Stickman, Webcomic

My good friend, who goes by the moniker of Thorax O’Toole, invited me over to his house to view the cinematic experience that is Electroma. I know the French duo Daft Punk were the creators behind the film. I was expecting to hear a lot of the band’s music incorporated into the film. I didn’t get that music, though. There was a soundtrack using a tasteful selection of scene-appropriate music. On the whole, the movie struck me as a very high-end student film project. The story holds strength because it’s about striving to understand identity. What does identity mean to us, to others, to a rock of a planet? There is no dialogue during the film. Each viewer creates their own as these questions are presented to them, with (and I need to emphasize this) plenty of time to think about it.

I highly suggest watching this with a bunch of friends like I did, preferably with a few film students or folks willing and open-minded enough to watch it to see what the fuss is all about. If you do find the movie torturous, hang in there. Electroma is actually short and will only claim an hour of your time.
Posted by PooBahSpiel at 2:13 PM No comments:

Posted by PooBahSpiel at 7:52 AM No comments:

The Comic Critic Reviews The Wizard of Oz

While The Wizard of Oz wasn’t a blockbuster upon its initial opening, Metro-Goldwyn-Mayer has since made a fortune from subsequent re-releases. Initial lack of box office success aside, the movie was nominated for a number of Oscars. Gone with the Wind might have won Best Picture, but The Wizard of Oz did win Best Music and Best Song. Sensing the movie’s growing popularity in the nation, and the lucrative profits to be had by careful licensing, MGM cleverly allowed it to be shown only once a year—on television. The Wizard of Oz went from a mere movie to an annual event, giving a sense of holiday to viewers. It softly represents a moment in history when black and white films were giving way to color film, when the country was striving to leave the dustbowl bleakness of the Great Depression behind and enter into a bright, fantastic, colorful future. The story fills that heart with warmth, encouraged strength of character, and remains fun for the whole family even to this day. I loved watching The Wizard of Oz every year when I was growing up. The movie left its mark on me as an adult. I belong to a not-so-secret secret society called The CLAW, and as part of our closing ceremony the members clap their hands twice and call out, “Beware the Flying Monkeys!”
Posted by PooBahSpiel at 4:10 PM No comments: