I'm looking forward to this weekend when my fellow CLAW members and I will be participating in the 24-hour Comic Challenge at Comic Book Ink.
Posted by PooBahSpiel at 9:26 AM No comments:

Jet City Comic Show Report and The Return of Stickman

I had a table at the Jet City Comic Show at the Seattle Center Exhibition Hall. This was the first year of the show and I'm proud to say that I pulled a profit, a modest one, but a profit all the same. The show kept me from posting a movie review this week, but I promise to have one ready for you next week. Here are some snapshots of the show and today's The Return of Stickman. 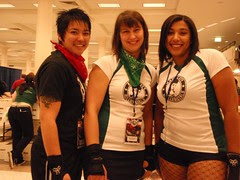 Rat City Rollergirls buying a copy of the book. 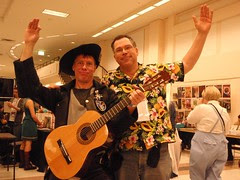 Keith Curtis of Crater on the Moon owns a copy. 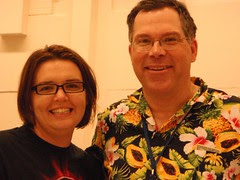 If you enjoy The Return of Stickman, you will also enjoy Emily Papel's 2^5 webcomic. 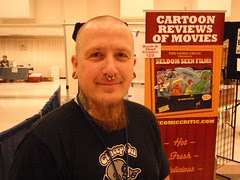 Drew Pocza of Pokeweed took home one of my giant squid posters.

Posted by PooBahSpiel at 10:32 AM No comments:

The story that inspired this strip.
Posted by PooBahSpiel at 4:31 AM 1 comment:

This movie has stuck with me over the years. I still remember how much I cried during this WWII tear-jerker when, as a kid, I saw it on television. ‘Though I’d seen other WWII films with piles of he-man action and bravery, this was the very first one that showed the British “Home Front.” And while it was very saccharin, I didn’t hold that against the viewing experience. Maybe I was just more open-minded as a kid, but I still see Mrs. Miniver that way and love it to death every time I see it. That is why I’m hanging all cinema logic: it’s a ten in my book. And let me add that Mrs. Miniver won seven, count them, seven Oscars. Mine were not the only heartstrings touched.
Posted by PooBahSpiel at 9:48 AM No comments:

The story that inspired this strip.
Posted by PooBahSpiel at 9:44 AM No comments:

Posted by PooBahSpiel at 10:57 AM No comments:

I don't eat frozen dinners, but my wife often takes them to work for lunch. Like so many of her colleagues, she fears any change on the packaging as it usually means a change for the worse on the contents.
Posted by PooBahSpiel at 6:49 AM No comments:

Posted by PooBahSpiel at 11:10 AM No comments:

Email ThisBlogThis!Share to TwitterShare to FacebookShare to Pinterest
Labels: 1206, late, sad, taxes, The Return of Stickman

Late in 1982, I transitioned from being a teenager who had just entered college to a twenty-year-old young adult. That can be an awkward age for anybody. Watching Tron is a strong reminder to me of what that time was like. Like me, it still reeked of the ‘70s, with its bell-bottoms, long hair, and multiple Disney movies starring Jeff Bridges. I tried all sorts of things to be cool. Some of them worked, but most of them crashed and burned and can only be looked back on as the hilarious idiocy of youth. Now I find Tron both painful and wonderful to watch, just like reading my old journals. Oh, I was such a geek.

Speaking of being a geek, here is a video I made this morning.

Posted by PooBahSpiel at 2:38 PM No comments:

My Sketchbook from Bumbershoot 2010

As promised, here are the sketches that I drew during Bumbershoot. I draw whatever the music inspires in me. I was lucky enough to get some of the band members to sign them after.

We decided that we would rather spend more time in bed than eat a proper breakfast. Instead we settled for a continental breakfast at the KEXP lounge before starting our final day of music listening bliss.

Ra Ra Riot – A very fun way to start the day. I only got one member to sign the sketch I did during the show. The other members were long gone.
Brent Amaker & The Rodeo – This over the top western band all dressed in black sang wonderful song with hilarious and cranky lyrics. We wanted very much to pick up a CD or a t-shirt to remember them by but unfortunately they had neither. Bummer! Still, they were an early welcome surprise concert that we immediately changed our schedule to accommodate.
The Moondoggies – The parents of the drummer happened to be sitting next to me while I did the sketch. I got to meet them, their son, and the rest of the band members, all of who signed the sketch. Said goodbye to mom and dad moondoggy by giving them two beer tickets I had in my pocket.
The Thermals – All the strokes for the sketch I did were done in time to their music. I was really digging the music and they really dug the sketch, which they all signed.
The English Beat – These legends were so totally memorizing as I sat in the second row that I couldn’t take my eyes off them, let alone draw anything.
Meat Puppets – The sketchbook stayed in the backpack, as it would for the rest of the day because the sky started to leak a little.
Jenny & Johnny – Originally on our schedule, then off, it came back on as we got out of Flatstock and had time back in our schedule.
Laura Veires & The Hall of Flames – We were too late to spend more time at the comic exhibition because it closed down at 8, which is where Laura was playing. So we sat down and listened before heading over to The Spits
The Spits – Okay, we actually didn’t stick around the watch The Spits. After finding that we were 25 minutes early for the concert we confessing to each other that we were exhausted. At which time limping to the car and driving home to our very welcoming bed sounded like a wonderful idea. We hope The Spits will forgive us.
Posted by PooBahSpiel at 5:19 PM No comments:

Email ThisBlogThis!Share to TwitterShare to FacebookShare to Pinterest
Labels: Bumbershoot 2010, Jenny and Johnny, Laura Veires and the Hall of Flames, Meat Puppets, Moondoggies, Ra Ra Riot, The English Beat, The Spits, The Thermals

We started the day by fortifying ourselves at The Hurricane Restaurant, a haunt well known by most the cartoonists in Seattle. We went into Bumbershoot at 11am, even though the bands don’t start playing until noon, to get in line for some canvas tote bags Toyota was silk screening on-site. Then it was off to the hidden KEQP stage where we would be seeing most of the bands on our list.

Fences – Krista introduced me to them; I’m going to add into my playlist rotation. I had a chance after the show to get all the band members to sign the sketch I drew while they were playing.
David Bazan – I stopped sketching while listening to these guys because the images they conjured in my head kept changing too quickly.
Aterciopelados – We listen to their albums a lot. Maybe if I understood Spanish I would have been more prepared for their colorful performance. The crowd was full of faithful fans.
Redwood Plan – The soccer gear the lead singer wore was a very valid indicator to the amount of energy she put into her performance. The rest of the band kept up too.
Bouncing Souls – Sometimes you can’t listen to a full set if you want to catch another band. We reluctantly had to leave them to see…
Surfer Blood - This is another band that Krista introduced me to. And again I need to listen to more of them. And again I was lucky enough to have the whole band sign the sketch I drew. They liked it so much that each member pulled the others out of the green room to come out and sign it.
Motion City Soundtrack – I think we enjoyed them even more Bouncing Souls. Both were at a new outdoor venue next to the EMP. Still, no rest for us as we marched across the center to see…
Delorean – We’re not fans of the new arrangement at the Broad Street Stage but we are fans of this group and stayed until folks shouted for an encore.
Weezer - We really enjoy their albums, and while we heard rumors of their live performance we did not expect the spidermanistic interaction that was both hilarious, spontaneous and wonderfully entertaining. Rivers Cuomo singing Beverly Hills from atop the port-o-potties had us in stitches. We left with the throngs all excited about the performances we will see on Monday.
Posted by PooBahSpiel at 11:33 PM No comments:

You might be wondering, “Mark, where are all the cartoons?” Well, last week I had a business trip to Boston that kept me busy, and this Labor Day weekend the wife and I are attending Bumbershoot. For those of you who do not live in Seattle, or the music scene, Bumbershoot is music festival that takes over the entire Seattle Center (where the 1962 World’s Fair was held.) I’d planned on showing you the drawings I do at the performances, but I forgot a critical cable and so you will have to wait. But I can keep you updated on the wonderful groups we got a chance to listen to.

Plants & Animals – A mellow sound for Indie music. I could listen to them all day. I drew one of the band members as a Cactus, which he found funny when he signed the sketch.
Justin Townes Earle – Very bluesy and he’s very good with the crowd. I drew his shoes. The man had an odd way of standing.
Budas Band – Lots of funky brass and all sorts of drums and rattles made these guys a lot of fun to listen to. I drew a hip cat wearing a suit having a drink under a banana palm.
Visqueen – A local Seattle band who we loved listening to. Stringy and fluffy at the same time with a bit of barb wire.
The Raveonettes – Dark and mood music that I just loved. I’m going to have to add them to my dark and moody line up. Weird and crazy stuff with the guitars. I drew a great raven. Wait until you see it.
See Me River – We are definitely going to pick up this band’s CD before we leave. Hard to describe this music. A grungy version of Ted Leo, but more rocky.
Niko Case – Tacoma gal who has come a very long way
Edward Sharp – We tried to get over to the stage to see him but the brick mass of people already arrived before the show kept us from even getting close. They should have put him on the mainstage. Whine!
Bob Dylan – Bob Dillon’s voice was Bob Dillon’s voice squared.
Posted by PooBahSpiel at 9:37 AM No comments: