The Comic Critic's Review of "Topkapi" 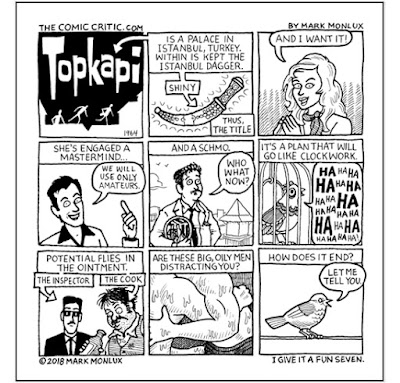 If I were to approach a layman on the street and ask if Topkapi was a people, a country, or a skin condition, they would struggle at guessing the correct answer. And they would be wrong if they guessed among the options presented, as Topkapi is the name of a palace in Istanbul, Turkey. I don’t know how many people in the States knew this little fact back in 1964, but they certainly became familiar with it once Topkapi took off at the box office. The words “caper” and “heist” are often used to describe a sub-genre of crime films that focus on the planning, execution, and aftermath of a theft. I think there is a distinction to be had between “caper” and “heist.” The former has a more comedic air while the latter has more lethal connotation. Topkapi definitely uses humor as a primary driver. We are left wondering what events are planned and which ones will turn out to be a comedy-of-errors. Our hero walking this tightwire of doubt and confusion is a minor league grifter played by Peter Ustinov. He’s pulled in as an unwitting accomplice and finds himself embroiled with both police and criminals far above his pay grade. Ustinov captures audiences’ empathy so superbly that this film brought him his second Oscar for Best Supporting Actor. Topkapi is a fun movie that will keep you guessing. It also has been the inspiration to many other caper, heist, and spy films with its use of acrobatic ropes and pulleys.


Won an Academy Award.
Posted by PooBahSpiel at 2:26 PM No comments: