The Comic Critic Reviews "Woman in the Window" 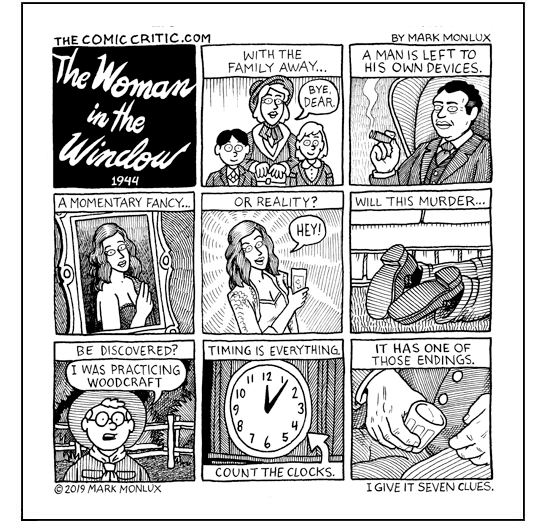 The Woman in the Window is a classic Noir film. You have the hero, who is also the anti-hero because his actions press against the rules of society. You have the femme fatale, whose appearance apparently dooms the hero. You have no-nonsense dialogue that’s sometimes slangy but always has an edge of flirtation. And lastly, you have cinematography that is consistently clever in its use of stark, contrasting lighting and shadows. The Woman in the Window meets all of those qualifications. It also delves into a premise, set forth at the beginning of the film, on the moral selection that defines a killing as murder. From that point on, it’s easy for the story to bring down a wrath-from-god judgment on the offender of the commandment: Thou shall not kill. The femme fatale can be seen as the alluring Eve offering the forbidden fruit that would lead to the breaking of yet more commandments. Our would-be-innocent hero is stepping along the edge of propriety and suddenly finds himself entangled in more than an academic exercise. Now, all that he is is at stake. The actors and actresses in this film provide all that is desired. The in-the-know audience sees beneath the poker face of Edward G. Robinson’s character, and gets to enjoy the superb micro-gestures of his eyes and breath showing the stress his character is under. The Woman in the Window was directed by Fritz Lang, and he masterfully provides a double ending to the film.  Lang admits the old trick. He argued that it was a compromise to the studio to comply with the Hayes Code, and still have a way for him to show one of the endings he wanted. He was proud that its construction was not just palatable, but entertaining, too. Certainly a laugh is generated when another potential femme fatale is introduced. Such an occurrence is highly unusual in Noir.
If you would like to see my movie reviews before everyone else, you can support me via my patreon page. Click Here.