Unboxing: How to Think When You Draw Volume 5

That was fun! For even more fun check out my Kickstarter.
Posted by PooBahSpiel at 9:23 AM No comments:

Posted by PooBahSpiel at 12:42 PM No comments:

I had fun unboxing another mystery package.
Posted by PooBahSpiel at 5:43 PM No comments:

I talk about how I randomly created stickers. I also mention my upcoming Kickstarter.
Posted by PooBahSpiel at 11:14 AM No comments: 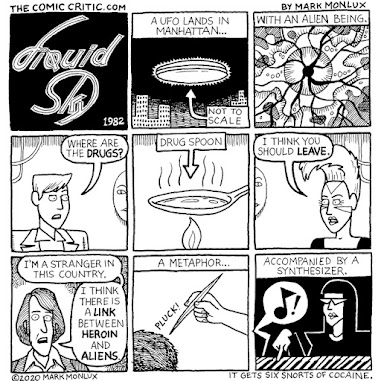 During the late Seventies and early Eighties, a crazy club scene emerged in New York City. A strange vampire with the swirling mental compass of Punk while decked out in the fluorescent neon pastels of New Wave, it greedily sucked the last little bit of life out of Disco. The nightclub scene was fueled by drugs, sex, nihilism, and an endless parade of anti-fashion. A miasma of chaotic, creative, spirit-led people pursued all sorts of outlets. Super 8 cameras were readily accessible and were picked up to create commentaries that paid no heed to established film standards. Pirate shooting was the norm, sets were accessible rooms and spaces, actors were often anyone free at that moment, and lighting was anything you could manage. These films formed what would become the No Wave movement. They were an inspiration to numerous filmmakers to just pick up a camera and start. Forget Hollywood  formulas—just go for your vision and damn the consequences. Liquid Sky is one of the success stories from the No Wave movement. Made on a shoestring of $500,000, it would garner a slew of prizes at film festivals while achieving a gross profit of $1,700,000 worldwide. It became the most successful independent movie of 1983. Liquid Sky is a cautionary tale suggesting people are cattle. Whether it’s society, fashion, music, relationship, sex, or aliens, everything is just a rope around their necks guiding them to the slaughterhouse. Liquid Sky looks trashy with all of the esthetic of a Nagel print left forgotten in a fraternity's garage. Yet somehow, its dated kitschy look only enhances the atmosphere and the spirit in which it was made.

I sort of took the Pandemic as time off from sending out this Newsletter. I want to get the blood flowing again. I also want to keep you up on my activities. So, you will be seeing neat stuff at the end of these emails. And please, share these emails with others. I'm going to be promoting this list. I'm also booked at some conventions. 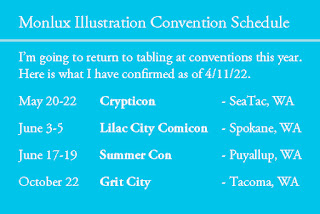 I'm prepping for my next Kickstarter, a series of enamel pins I'm calling "Atomic Age Alien Series". The pins will be two inches tall with to studs on the back to hold it in place. They will be mounted on movie poster themed backers that will be 2 x 3.5 inches. Here's an idea of how "Invasion of the Saucer-Men" will look like: 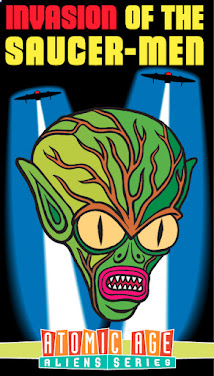 I will give you an early heads up because there will be an early bird discount within the first hours of the campaign. Let me know if you desire a special reminder. And again, please let share this email with your friends.

I've been posting regularly on my Patreon page during the Pandemic. It's the only place right now where you can get a daily dose of "The Return of Stickman." Also, I'm posting new movie reviews there. This is a link to My Patreon Page.
Posted by PooBahSpiel at 10:04 AM No comments: