The Comic Critic Review Lords of War, and the Bellingham Comic Con

I’m sure you have seen an animated flip-book, one with a stack of images you quickly flip through that change from page to page, the end result being a short animation. I want you to keep that image in your mind for a moment. The opening credits for Lord of War almost appear as a tacked-on social message that should be at the end of the movie. But from the opening credits onward, there is a series of social messages stacked together, each saying nearly the same thing, all telling the same story. I don’t need to tell you what the story is because you see it daily in the news. Lord of War is just like a flipbook. Its real message is how everything is black and white on each page; the only illusion is the blur as its pages are flipped.

The Bellingham Comic Con
My friend Joe Manfredini helped me man my table at the Bellingham Comic Con this last Saturday. This is the second year for the show. Last year's show was such a success that the promoters located a larger venue this year, and again they sold out. I saw some friends there such a John Lustig who does Last Kiss and Drew Pocza who does Pokeweed. A number of my fans came out to see me to get signed copies of the books and I also met several new fans. I did far better at this show than I anticipated. Perhaps I'm getting better at marketing myself, but I really do think it is thanks to the promoters and their efforts. I'm looking forward to participating next year. 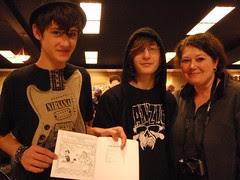 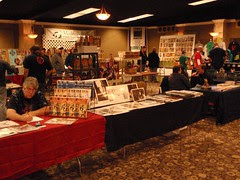 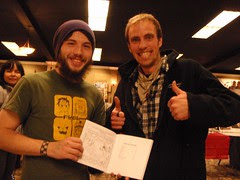 Thank for the fun time!
Posted by PooBahSpiel at 9:53 AM No comments: