My friend Leilani Lisa Lawrence can be found in the project.

I've been a bit depressed. When I began this project I thought I might incorporate friends as characters into a scene. It quickly became a theme. Kristopher Brannon, also known as "That Sonics Guy" was a friend and I wanted to honor him by having him as a character. One of the first people I sketched for the project was Leilani Lisa Anderson. She was very pleased when she saw the video of my drawing her fire dancing. Unfortunately, Lani became very ill, and just as she was going to start a treatment she died. The abruptness was shocking. She was a vibrant person in my life. I think she would like to have a small cartoon version of her fire-dancing in a jigsaw. She'll go on performing for people in a surprising way. As I progress with this project new unexpected aspects I didn't anticipate the result. And I have to smile even more. Finding the hidden is what this project is all about. 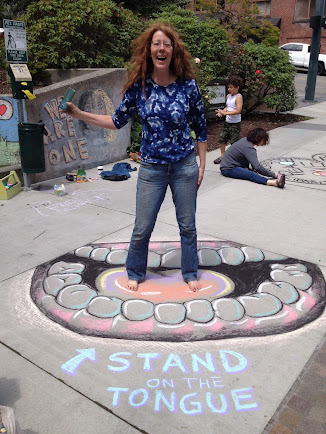 Lani interacting with one of my chalk
drawings at Frost Park in Tacoma.
Posted by PooBahSpiel at 9:24 AM No comments: