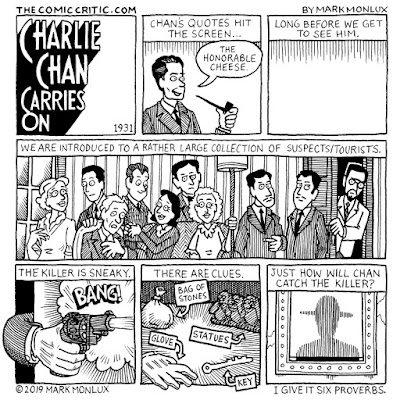 Charlie Chan Carries On is not the first movie in which Charlie Chan appears. There was a ten-part serial and a couple of other movies where Chan was a secondary character. Charlie Chan Carries On is the first film where he played the main role and audiences responded well to the film. Warner Oland, a Swedish actor, was brought in to play Chan. Whitewashing was a film industry practice, casting white actors in non-white roles. Oland would be one of a series of non-Asian actors to play Chan. This is more than a little ironic as Earl Derr Biggers, the writer who created Charlie Chan, had a great dislike for the prevalent Yellow Peril stereotype. He was inspired to create Chan after reading about two detectives of Chinese heritage working on the Honolulu police force. He wanted to create a character opposite the Yellow Terror stereotype, an honorable Asian working on the side of the law, not against it. The irony of whitewashing would become nearly embedded in the Charlie Chan character as the overly prolific use of ancient proverbs. Chan became a stereotype of the slow acceptance of the Asians by the hypocritical practice of social representation. It wasn’t a perfect process, but it did prove to be highly successful. There are over forty Charlie Chan movies. There was a prolific period when comics, radio, and television shows featured this popular detective. There were even other Asian detective movies that resulted. Mr. Moto and Mr. Wong each supplied a series of mystery movies. And while the implementation of these movies, featuring clever heroes from Asian countries, was far from perfect, they did broaden the American psyche, even through and after WWII that the only true threatening peril is that of racism. As to Charlie Chan Carries On, it is sadly a lost film: well, sort of. Studios would often create a Spanish version of the same movie using the same sets and many of the same leads, but instead of dubbing, they would cast Spanish-speaking actors. Irony rears its head again—the only way you can watch one of the earliest whitewashed Charlie Chan films is via the Spanish version, reading English subtitles.
Posted by PooBahSpiel at 6:00 AM No comments: