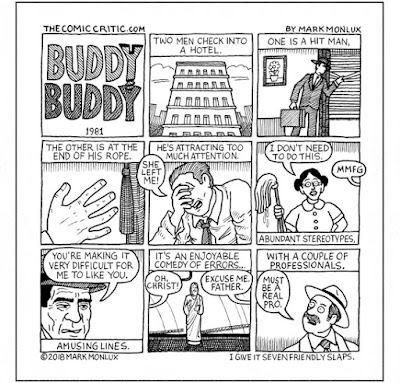 The chemistry of Walter Matthau and Jack Lemmon was first discovered in The Fortune Cookie. With The Odd Couple a few years later, they were solidified as a marketable buddy team. Lemmon and Matthau would go on to do eleven films together. I have a soft spot for Buddy Buddy. For whatever reason, it’s a film I’ve seen many times. Buddy Buddy has that comfortable feel that lets you settle in to watch instead of clicking over to the next channel. I’ve always enjoyed its premise and story. Matthau plays a highly tuned, cool-headed professional hit man; Lemmon is a blindingly over-reactive husband whose world is turned upside down when his wife leaves him for a sex guru. I find Buddy Buddy visually unique in that while it was created in 1980 it has the look and feel of a movie from the 1960s. There’s a lot of 1970’s New-Age-hippie-pseudo-psychology that spills into the script and comes across as a little dated. The movie is cluttered with stereotypes offered up as comedic elements. Just another indicator that this movie was a vehicle for two things: Ham and Cash. But even with its faults, I still can’t help enjoying this movie.
Posted by PooBahSpiel at 7:25 AM No comments: