The world is truly an endless source of inspiration for my strip. Here's the news article of a grandmother's adventure with the airlines.
Posted by PooBahSpiel at 9:26 AM No comments:

Here is the story that inspired today's strip.
Posted by PooBahSpiel at 11:40 AM No comments:

Email ThisBlogThis!Share to TwitterShare to FacebookShare to Pinterest
Labels: 1260, bet, naked, The Return of Stickman, wal-mart

I enjoy reading other critics’ blogs. One of them featured a list of one hundred must-see horror movies. I was shocked that I’ve yet to see twenty-two of them, many made in the last ten years. As someone who considers himself a horror aficionado, I found that, well, horrifying. I’ve wanted to see The Orphanage for a while. My friend Pammy would enjoy it. She loves a good horror film to exercise her brain cells. I’m currently exercising my own brain cells, deciding which one hundred horror films I’d consider as must-see. I think The Orphanage might make the list.


Emerald City Comicon is coming soon! And once again I will have a table there. I will be selling my book, giant squid posters and Donnie Darko t-shirts! My table location is J-15. To get there from the Main Entrance walk straight to the back of the convention and I will be in the right hand corner. I know a lot of you missed the show last year and have been dying to go this this show. It's bigger than before! Look to see you there. 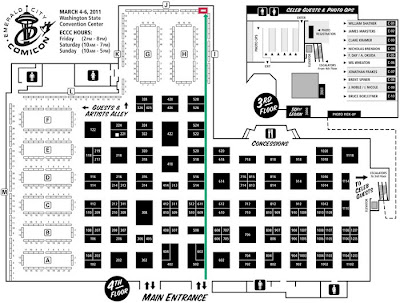 Posted by PooBahSpiel at 7:02 PM No comments:


Here is the answer to another question I get asked a lot from fellow illustrators
Posted by PooBahSpiel at 4:06 PM No comments:

I'm sure a lot of us support his first choice.
Posted by PooBahSpiel at 9:05 AM No comments:

You might not find the news story that was the inspiration behind this strip. Court cases seldom get headlines. This story was provided to me from a fan in the form of a .pdf of the court's ruling on the lawsuit. When I read it I didn't know whether to laugh or cry.
Posted by PooBahSpiel at 8:50 AM 1 comment:

I think we will be hearing more about these in the future. I know that a few of these vehicles have been impounded. I would like to be in the audience when that police auction happens.
Posted by PooBahSpiel at 10:08 AM No comments:

Email ThisBlogThis!Share to TwitterShare to FacebookShare to Pinterest
Labels: catapult, hippies, The Return of Stickman

The Comic Critic Reviews The Mechanic

Are movie audiences less intelligent now than in the seventies? I don’t think so. So why do writers these days feel almost obligated to provide more exposition than before? What made the Charles Bronson version of The Mechanic good was it made us have to think about what was going on. Working your gray cells was part of the pacing of the film. I will admit that the Jason Stratham version of The Mechanic was fairly clever in the ways they provided the exposition. In this case, it was the start of what must have been a slippery slope of changes. Still, they were pretty faithful to the original and paid quite a bit of homage to a film I enjoy so much that I watched it again just a few months ago.

Happy Valentine's Day.
Posted by PooBahSpiel at 10:50 AM No comments:

I guess there are worse things in life than having a dog give you diagnosis of colon cancer.
Posted by PooBahSpiel at 10:25 AM No comments:

I didn’t really become a fan of Jason Statham until I saw Transporter. Up until then the only other movie I’d seen him in was Ghosts of Mars, in which he was great. So, after seeing him a second time in what I thought was a pretty decent film, I went looking for other films in which he appeared. I’ve seen nearly all of them now. And I saw him just last week in the remake of The Mechanic. So you might be wondering why I’m reviewing Crank instead The Mechanic. Not because it’s better. I’d rate both movies about the same, though I did laugh more during Crank. No, I drew this review first because the script for it popped up in my head almost instantly while I was looking over my notes at the end of the movie. I drew this strip first because I’m a lazy, lazy man. But Jason Stratham’s character in this film is not. Enjoy the ride.

Under the column: What did I do the weekend?
I was proud to be the moderator this last Saturday for the SPGA/Seattle Chapter of the Graphic Artist Guild's Graphic Novel panel. The panelists were
http://www.peterbagge.com – Hate and its precursor Neat Stuff.
Phil Foglio - Hugo Award Nominee – Buck Godot, Myth Adventures, Girl Genius.
Mike Grell – Jon Sable Freelance, The Warlord, Green Arrow.
Jason Janicki – Writer with Wayfarer’s Moon.
Leigh Kellogg – Artist with Wayfarer’s Moon.
Michael Oeming - Eisner Award Winner – Mice Templar, Quixote, and Powers.
I'm a big fan off all of these guy's work, as my bookshelf will attest. It was the first time I got to meet some of them. The audience got a lot of information from them and I hope to get some of the video footage up on the web soon.
Posted by PooBahSpiel at 9:51 AM No comments:

This strip was inspired by a news article where two men were arrested for knocking over vases in a cemetery and then loading them into the back of a truck. They had a huge quantity loaded up. The quantity almost made me take this strip in a different direction.
Posted by PooBahSpiel at 6:13 AM No comments: