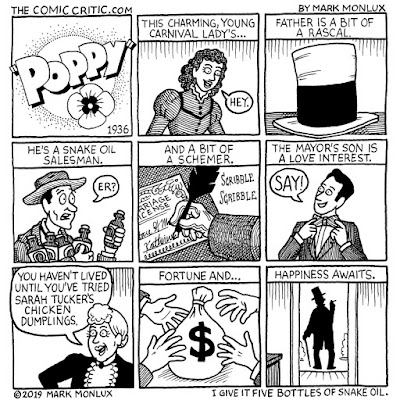 Poppy was brought the screen after a successful run as a three-part stage musical. W.C. Fields played the role of a colorful carnival barker, con man, and father to “Poppy.” Poppy was a “revue,” containing elements of songs, skits, and comedy routines. The production ran in New York and then moved over to England. Perhaps it was there that Fields was inspired by a cartoon character named Ally Sloper; a red-nosed, blustery, lazy schemer constantly dodging creditors. Fields' attire certainly resembles Sloper’s: a tall white top hat with a wide band, an upturned white collar, tailcoat, and spats. Much of the ensemble would come to create what we now consider to be the iconic image of W.C. Fields. Considered one of the world’s best jugglers at an early age, his ability to manipulate the objects about him is as gracefully choreographed as a ballet dancer, all the while looking like he’s bumbling in the attempt. His role as Prof. Eustace P. McGargle in Poppy would take him from the stage to the movies, where he would become one of the world’s best-known comedians. His trademark raspy drawl with a flowery vocabulary would make him instantly recognizable. Fields’ characters in films would often show him as a drunk, con-man, and henpecked. Field’s ability to play the downtrodden everyday man seeking to find a moment of solace or a sip of drink endeared him to audiences. His self-talking mutterings were imbued with wit and guile. Several of these mutterings have been added to the long lexicon of lines attributed to Fields. One of the most famous of his lines came near the end of Poppy when he advises his daughter, “Never give a sucker an even break.”

Posted by PooBahSpiel at 10:00 AM No comments: