Posted by PooBahSpiel at 1:34 PM No comments:

This was a real thing. Besides spider venom there was also scorpion venom, and other poisons.

In other news, this will be the first weekend that I'll be spending the entire weekend at home. Then I only have one show in November and one show in December. I've lost count of the number of shows I've done, but I'm confident it's over a dozen. I have enough information now from the last three years that I can make a chart and establish which shows are the ones that I need to give priority. But, before I do that, I need to finish working on my next book and get it shipped to the printer.

Posted by PooBahSpiel at 7:43 AM No comments:

The Comic Critic Reviews Matango aka: The Attack of the Mushroom People

I can’t help but wonder if Matango inspired Gilligan’s Island. You have a small crew of people with different roles in society cruising the high sea for jollies when a storm comes up and shipwrecks them. In Matango, the island on which they are shipwrecked has barely anything edible on it. Most of the movie is spent revealing the various crew members’ truly cruel and selfish natures as they struggle to survive starvation. It’s a dark and uneasy story compared to the kindhearted Gilligan’s Island, where everybody cheerily works together on their island rich in its bounty: bananas and coconut radios. It’s Matango‘s dark, brooding atmosphere that makes it so creepy. And also creepy is that the mushrooms’ poisonous nature is known, but never truly accepted (except towards the end of the movie). The mushrooms are more than an obvious physical metaphor on human society. Or maybe it’s the evil of peer pressure. Or it might be a bit of both.

Tonight I will be participating in a Pumpkin Carving Contest hosted by the CLAW. I'll be sure to post photos of the various pumpkins later.
Posted by PooBahSpiel at 9:35 AM No comments:

They just had to arrest them for something.

Posted by PooBahSpiel at 9:05 AM No comments:

Email ThisBlogThis!Share to TwitterShare to FacebookShare to Pinterest
Labels: #1513, forty, motel, pythons, The Return of Stickman

I'm doing one last strip on this theme because I forgot to send new scripts to my copy editor and this strip only took one sentence I knew I could get right.

Posted by PooBahSpiel at 9:20 AM No comments:

Email ThisBlogThis!Share to TwitterShare to FacebookShare to Pinterest
Labels: #1512, corn, The Return of Stickman, Uncle Eddie

Horror movies have been exploiting hormonal teenagers from the very beginning. The number of sex-themed horror movie tropes is immense—and legendary. What gave Ginger Snaps its box office kick and subsequent legs is how it openly embraced the parallels of the onset of puberty with lycanthropy. You don’t want to talk to your parents, who are at best “lame.” You’re a social outcast morbidly focused on death because you’d rather be dead than be living in high school. So, you’re stuck fumbling for information from such questionable sources as old-wives’ tales, the Internet, and some student nurse. And desperately trying to keep it all together before people notice – the rising body count. This isn’t an “I was a teenage werewolf” movie; it’s an “I was an angst-riddled teenage werewolf” movie. And that twist saves it from being another fly-by-night werewolf film.
Posted by PooBahSpiel at 11:44 AM No comments:

I think it's time to think about what the next strip will be about.

Posted by PooBahSpiel at 11:19 AM No comments:

My delay in posting these strips I attribute to getting a cold at QZ con and bed rest before heading out to the Bellingham Comicon Last weekend. The conventions season is not over either. Next weekend it's Geek Girl in Seattle. You can find me the the Artist Alley room.

Posted by PooBahSpiel at 2:16 PM No comments:

The Return of Stickman #1509 & Logo for Tacoma Games

I hope you're enjoying getting acquainted with Stickman's family.

Here's my fall schedule of events:
Rose City - Portland
Report: I had a great time playing shuffle the artist as the convention staff found my correct place in the order of things. Great dinners out with the gang. The drive to and from was a lot of fun too.
QZ Con - Tacoma
Report: Tacoma worst weather in years! The torrents of rain made for road closures and highway traffic nightmares. The attendance was very low as a result.
October 5-6 24 Hour Comic Challenge - Tacoma
October 12 Bellingham Comic Con - Bellingham
October 19 Geek Girl Con - Seattle
November 2 Jet City Comic Con - Tacoma

One of my projects in September was creating a logo for a new gaming store opening up in Tacoma called Tacoma Games. I came up with three really great ideas that both the client and I loved. We were all happy choosing this one as the winner. 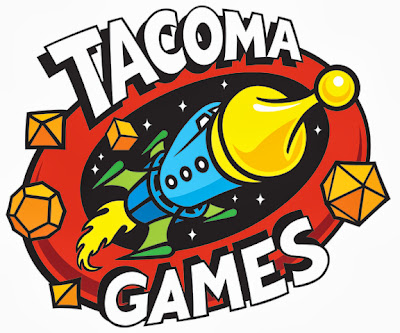 Posted by PooBahSpiel at 9:19 AM No comments: