The Comic Critic's Review of "A New Leaf" 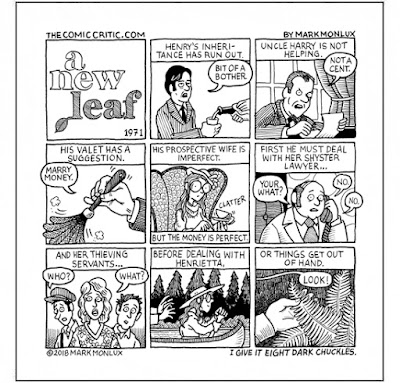 A New Leaf has always been one of my favorite films. I first saw it when I was a tween in the early seventies. The summer of love was in the past but the social effects of the ‘revolution’ were leaving their mark on all levels of society. Long hard was being accepted in the mainstream, as was the environment and social responsibility. In this atmosphere of steps being taken to the obvious change required, I was becoming aware that society had never been in a fixed state, it had always been fluid. This breaking away from the mindset that everything is as it always was provided me with a new lens to observe the world. I began to enjoy dark comedy. Hypocrisy delivered straight on levels both low and high, subtle and obvious. It might have been this new mindset that led to my viewing of A New Leaf remaining so fixed in my mind. I remember smiling all the way through the picture. What I especially love is the levelness of delivery by the actors, the sets, and the unhurried speed of the storyline’s movements. The slapstick that occurs isn’t merely for slapstick sake. The hidden social commentary isn’t working on an obvious agenda so much as it was merely peeling back a veneer to reveal what was underneath. There is an interesting story that is occurring underneath the obvious storyline. There’s another hidden layer of commentary underneath the obvious hidden social commentary. A New Leaf starts off with a character as shallow as a plate. He’s aware of his shallowness and is in no way offended or disturbed by it. What does disturb him is that he must stop being idle if he is to have any hope of retaining a lifestyle of idleness. Walter Matthew is cast as a young wealthy playboy. His lumpy mug hardly fits the stereotype of a rich playboy. But apparently, that doesn’t matter in the circles in which he travels. Raised rich and well groomed he knows the rules etiquette of those born into money. Being rich is ingrained in his identity that the concept of his being broke takes more than a little while to sink in. Again, it’s the pacing that is wonderful. He doesn’t flap around like a fish out of water. His movement into action is one of calm as if his circumstance never required the need to learn how to act frantically. It’s a brilliant portrayal of the character. Elaine May’s character is an extremely shy, clumsy and awkward rich heiress who is naively being taken advantage of by her lawyer and household staff. While her fortune might be vast the audience sees her true riches are innocence and kindness. She’s also a walking catastrophe. Elaine May directed and was one of the writers of the story. She knew her character was the pivoting point for the whole movie. She also knew that the introduction of her character should not disrupt the pace of the story. Again, we have some masterly conducted acting. When A New Leaf was released it won high praise from critics and the audience. It received various award nominations. But it’s performance at the box office wasn’t extraordinary and it didn’t walk away with any of those awards. It briefly was out of the public’s eye once it left the theater. Thankfully, its quality made it an easy selection for television and cable viewing. That’s where I discovered it. Now A New Leaf is considered a classic film gem deserving of viewing by cinephiles.
Posted by PooBahSpiel at 4:12 PM 1 comment: