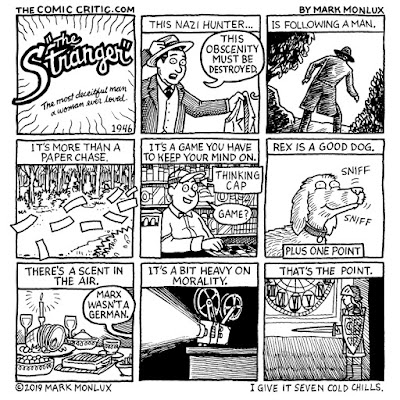 The crimes against humanity committed by the Nazis during WWII were so heinous that some Americans didn’t believe the reports. That is why it was so important that the Allied War Crimes Commission collected and presented as much audio and visual documentation as possible. The reels of footage showing the horror of the Final Solution at concentration camps were instrumental in pulling back the veil of disbelief. The Stranger was the first commercial movie to show it. The Stranger was a success at the box office, pulling in over double its production costs. Film historians in the know decry the heavy editing at the beginning of the film. Gone is most of the footage establishing the ruthlessness of a lead Nazi as he escapes the continent and embeds himself in the heart of America. Some say that after such hacking, The Stranger was reduced to a small town murder movie and that it was less of a movie as a result. I like to see the editing as having left a clearer message for the audience of the time: That your preconceived notions of how things were—were wrong. That any person with an understanding of what is right and just would have to admit —by the horrific evidence before them—that truly evil people exist in the world. And that, as difficult as it must be to admit, you need to acknowledge such evil and stand against it. Yes, I would have loved to have seen the additional footage. It would have made The Stranger a truly grand Nazi-hunting movie. But its role in opening the eyes of 1940s America should not be disregarded.
Posted by PooBahSpiel at 11:35 AM No comments: