Now wonder our jails are full with masterminds like these.

Tomorrow I will be at Comic Book Ink participating in the 24 Hour Comic Day. If you want to be inserted into my comic, just bring me a meat dish, or make a donation to The CLAW Student Scholarship Fund. I'll be sending out regular posting on my twitter if you want to follow the progress. Here is the comic I completed last year, a mash-up of Copyright Facts and a Zombie Apocalypse.
Posted by PooBahSpiel at 8:49 AM No comments:

The folks at Victoria Secret have some interesting ideas of what's sexy.
Posted by PooBahSpiel at 9:30 AM No comments:

Email ThisBlogThis!Share to TwitterShare to FacebookShare to Pinterest
Labels: diamonds, The Return of Stickman, Victoria Secret

The Return of Stickman and the 24 Hour Challenge

A couple of weeks ago my good friend James Stowe, fellow founder of The CLAW, and all around fantastic guy, asked me if I would draw Stickman participating in the 24 Hour Challenge - in 24 panels naturally. He would then apply the art to a fantastic poster design so that we might be able to promote the event at Comic Book Ink. I think he did a great job on the poster. So here is the poster as today's Return of Stickman strip. 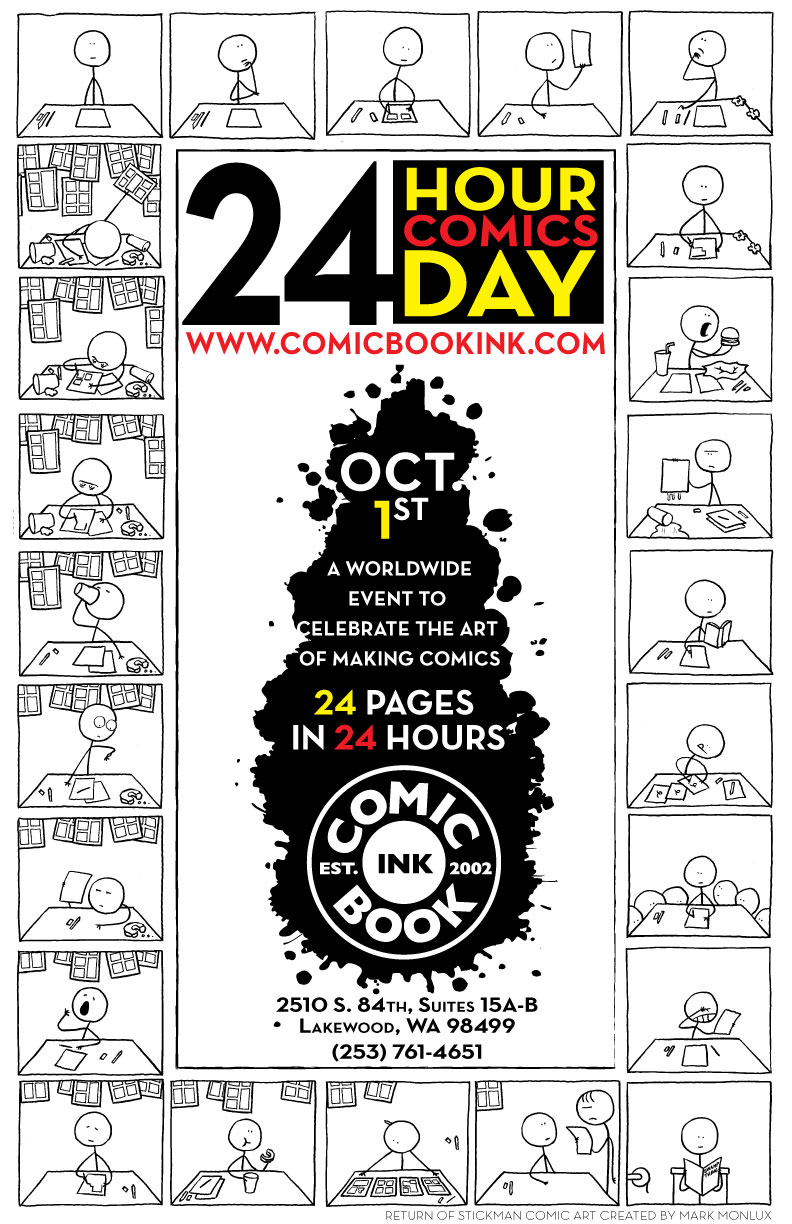 By the way, Stowe and I have once again renewed our yearly bet as to who will finish the contest - first (or if at all as the case may be.) Please stop on by to provide us with meat dishes or donations to the CLAW Student Scholarship Fund and you will end up in the cartoon.
Posted by PooBahSpiel at 8:52 AM No comments:

It's hard to ignore news stories like this one when they happen in your town. This is not the first time I've heard of somebody asking their neighbors or friends who to get rid of a body. All I can think is that these folks were never in the Boy Scouts.

If you're a regular reader of this blog you might have noticed that there was no movie review posted yesterday. I never got around to drawing a review last weekend because I was busy attending the Jet City Comic Show. This is the second year I've attended the show and I will be in it again next year. Here are a few shots I took at the event.

My first sale of the day! 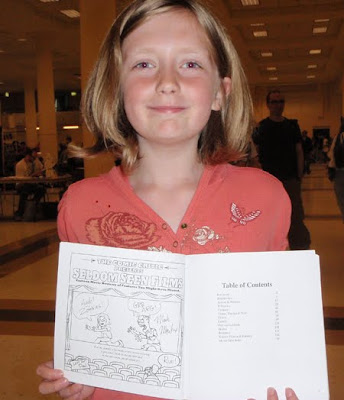 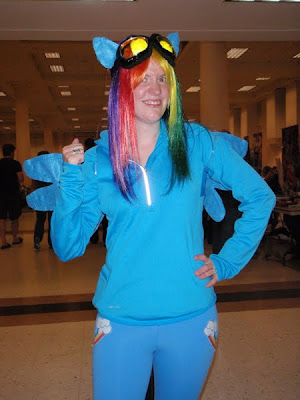 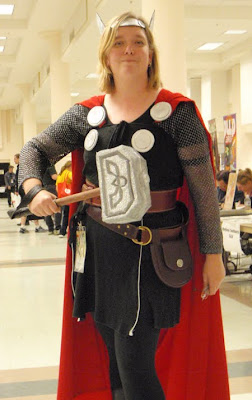 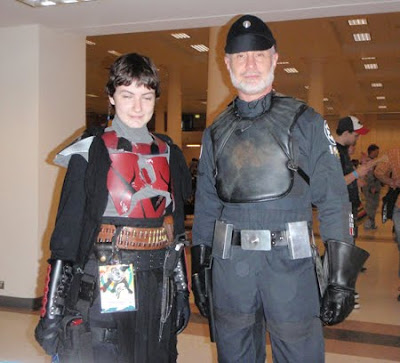 Jet City's mascot is Bomber Girl and this year she was played by Sierra McKenzie. You might have seen Sierra in some of my other photos. She is part of a modeling group that convention and trade shows hire to promote events or products. 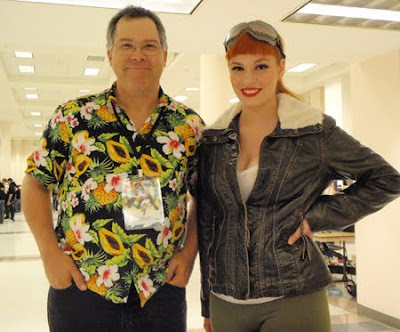 My last sale of the day. The Brains! t-shirt was a big hit. Posted by PooBahSpiel at 7:27 AM No comments:

Here the follow-up strip to yesterday's strip. Here is the corresponding news article.

Tomorrow I will be at the Jet City Comic Book Show. Last year was their first year and there was a line at the door when they opened at 10am. I know that the first folks through the door get a free Jet City poster featuring Bomber Girl. Also, between various highways and bridges closed down, and all the events that are happening throughout the city, traffic is going to be a bit thicker than normal. Plan according.
Posted by PooBahSpiel at 9:30 AM 2 comments:

Sometimes I write these strips a few weeks in advance to give myself a buffer. Since the original news story there has been an update. You can look forward to a follow up strip tomorrow.
Posted by PooBahSpiel at 10:18 AM No comments:

There was no new item that inspired today's strip. I just live close to Puyallup, WA. And the Puyallup Fair is the largest fair in the state of WA, even though it is not the State Fair. Since I live so close I usually go to the fair every year. Sometimes I don't make it to the fair because I forget when it starts and ends. I'm definitely going this year.
Posted by PooBahSpiel at 9:18 AM No comments:

About the only think I left out of this strip from the news article is the involvement of the weatherman.
Posted by PooBahSpiel at 10:13 AM No comments:

And as I was mulling all of that over, I just couldn’t help but remember my own experience in the theater watching this film. I had no idea what the film was about. I’d snuck into R movies before with my friend and was confused as to why he made sure to bring his mom along as a chaperone this time. My friend’s family didn’t own a television, and to my knowledge they never went to movies. But maybe my friend thought a nice little comedy would be just the thing to loosen his mother up.

It wasn’t until the first blatant sex scene (one of many) that I realized he’d planned the whole scenario so that we would definitely get into the show, and that I would be a body buffer between him and his mom. As I once again thought over the evening (for I’d thought about that mortifying night many times over the years), and the lengths my friend went to accomplish his scheme, I had to admit the whole story was just as funny as the movie itself. So it made sense to work my personal story into the strip.
Posted by PooBahSpiel at 8:38 AM 2 comments:

Why is it everybody has moose troubles but me? While this strip was inspired by this news item it's not 100% factual.
Posted by PooBahSpiel at 9:41 AM No comments:

Sometimes it's easy to tell when somebody's elevator doesn't go all the way to the top, are not playing with a full deck, have a screw loose, or are just plain bonkers. And while the general public has to put up with them during in-face-time I feel for those poor immediate relatives that have madness as part of their daily routine. And, yes, this was inspired by a real news story.
Posted by PooBahSpiel at 8:38 AM No comments:

Today's strip was inspired from a friend in Australia. She'd been corresponding with an American stationed in Nigeria and had a question for me. "In the USA do you use the word Movies or Cinema?" I responded that I personally found the word Movies was the more frequently used word. But that might be solely a regional thing. Oh, by the way, I just inherited $20 million dollars and it would be a huge help if I could get it out of the country for 24 hours.
Posted by PooBahSpiel at 9:23 AM 1 comment:

Part of me wishes I could have been there for Metropolis’s debut. It was a time of explosive imagination. It was at the very start of film. No rules had been set to govern it; no preconceptions were available to hamper it, even the definitions of new words to describe it were in flux. And into this brand new media came this extravagant science fiction drama, filled with cultural, philosophical, ideological, and artistic references, some old and others just entering public discussion. It’s no wonder that nearly all of its imagery has become iconic. Yet, because Metropolis’s influence on the science fiction genre was so enormous, part of me is grateful that I wasn’t there in 1927. If I were, I couldn’t help but compare everything that came afterward to that first awe-inspiring viewing experience.

A little personal note here. I have a tremendous love for movies. But if I collected a DVD of every movie I enjoyed, there wouldn’t be any room in my house for furniture. So, it was a strictly survivalist decision to limit it, using personal nostalgia as my guiding factor. After a lot of thought, I realized two qualifiers that would allow a movie to enter my collection:

1. Any pirate movie.
2. Movies in which robots are the primary focus or are heavily featured.

The Return of Stickman, guest strip by Bart

Special thanks to Bartosz Solodkowski for sending in a guest strip for Stickman. It made my life easier today. Thanks, Bart! Fame and fortune will soon be knocking on your door!
Posted by PooBahSpiel at 10:36 AM 2 comments:

The Comic Critic will be at Jet City

On Saturday, September 24th 2011, The Jet City Comic Book Show is going to be held in Seattle at the Seattle Center Exhibition Hall located at 299 Mercer Street from 10am to 6pm. Tickets are only $8. If you pre-order your tickets you will receive a free Bomber Girl print by Matthew Clark. This will be the second year I’ll be attending the show. You can find me in the Artist’s Alley at table AA25. 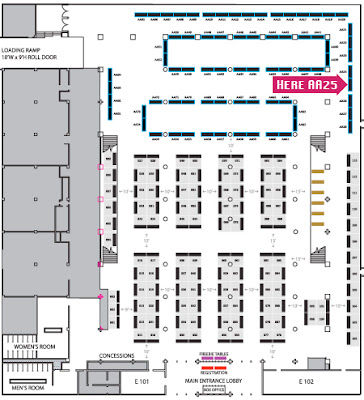 I will be doing drawing/signing for those who buy my book. Almost everyone who subscribes to this blog knows what my book’s about. But, if you don’t, then check out this video.

It’s one in a series of reviews that tag into my book, “The Comic Critic Presents Seldom Seen Films.”

Special thanks to Adam the Alien for producing this and the other movie review videos for me, to Joe Izenman who created my jingle, and of course my good friend Joe Manfredini whose been my right hand man at so many conventions.
Posted by PooBahSpiel at 8:40 AM No comments:

I thought that Wristcutters: A Love Story would be a small, slightly sad art-house film. The initial setting lures you into thinking that you’re watching a purposefully dismal story. Then you get surprises. They aren’t big surprises, more like hints of surprises. And you can’t tell if they are dark or light surprises. Either way they are piling up and engaging in ways you didn’t expect. And the next thing you know, you’ve had a perfectly delightful experience.

I’m still mulling over how a dog ends up in a world inhabited by suicides.
Posted by PooBahSpiel at 9:37 AM 1 comment: