The Comic Critic's Review of "The French Connection" 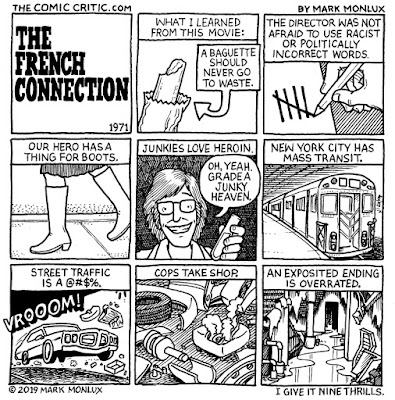 The French Connection has one of the most famous car chases in movie history. Featuring a 1971 Pontiac LeMans, it was carefully choreographed stunt. Part of the reason for this choreography was because the chase was being conducted without the proper permits. That means the streets in which the scene was shot was not cleared of normal traffic. Off duty police and stunt cars were poised to stop traffic, and other stunt cars were arrange to provide the near misses. Some of the shots were angle was set low with a bumper mounted camera capturing all the trash and dirt of the street and as the car raced along. Even with precautions in place some of the near misses became crashes. An one crash was completely unpredicted as a fellow leaving his house didn’t realize that a car chase was being filmed. His vehicle was paid for and all of these lucky accidents went into the final cut of the movie. What you get is a true to life reckless car race lasting five minutes and leaving you shaky at the end of it. The French Connection is also ground zero for numerous cop show tropes used so heavily since then they are considered trite. It was also the first movie that did an excellent job showing the city’s true gritty underbelly and the real nature of police work. All of which have become a genre of entertainment in itself.
Nominated for eight Academy Awards it won five including Best Picture.
Posted by PooBahSpiel at 11:11 AM No comments: