And I would have gotten away for it! If it wasn't for that damn lonely spider.
Posted by PooBahSpiel at 8:09 AM No comments:

Posted by PooBahSpiel at 10:43 AM No comments:

The Comic Critic Reviews "Fido", and The Return of Stickman #1048

October has been “Zombie Month” here at the Comic Critic. This version of the walking dead places us in an idealized 1950s America. Except all the cold war paranoia has been replaced with Zombie paranoia. And those mid-century high ideals have a hard time meshing with the gruesomeness of the living dead. Both zombie film aficionados and John Q. Public are in store for plenty of laughs as homage is doled out to early American sit-coms. Fido is a lot of fun.

Every time I start writing a comment on a Stickman strip I come up with another idea for a stickman strip. I wonder if this topic is a dead horse yet. Will that stop me?
Posted by PooBahSpiel at 8:44 AM No comments:

Lots more to this study. I'm tempted to do another strip. Wait and see. My first thought was, "Who is spending the money to do this study?"
Posted by PooBahSpiel at 7:13 AM No comments:

What a bummer for the car dealership guy. First he doesn't get a commission, then he looses his iphone, and you just know he's going to get grilled when he gets back to the dealership. It's enough to make you want to change careers.
Posted by PooBahSpiel at 6:57 AM No comments:

I can understand the guy not calling the cops. I wouldn't want to be part of a death-risking high speed chase either. But, just how well will your situation go down with your boss when you call it in?
Posted by PooBahSpiel at 2:55 PM No comments:

Die You Zombie Bastards! is a great title for a movie. It lures you with the promise of a wholesale massacre of zombies. Woe be unto you, you hapless soul, if you saw this movie without first reading a description of it. Even the one I read gave me some hope:
“Red, a serial killer and cannibal, battles against an evil bent on filling the world with Zombies.”

But to be honest, I was already enticed by the title alone. For my pains, I was rewarded with a cruel, visual bludgeoning of this campy farce. At every turn, it tried to overact, over-ham, over-gross, over-digest, or otherwise to leave its audience with an icky feeling: they would be better off without their eyeballs. It was bad for the sake of being bad, awful for the sake of being awful, and it somehow made full-frontal nudity an eyesore of a memory.

General moviegoers might be under the impression that zombie movie fans have a higher tolerance for awful plots and terrible dialog, all for the sake of watching some gore on the screen. But that’s not the case. We can be as deeply disappointed as the next guy when we are served up a heaping portion of swill.

Yet, even after watching this tragedy, I still want to buy a t-shirt with the film title emblazoned on the chest. And I can’t get that accursed theme song out of my head.
Posted by PooBahSpiel at 8:46 AM No comments:

I've always been a fan of country fairs and largest pumpkin contests and the like. I wonder where the ribbon for this one will go.
Posted by PooBahSpiel at 11:26 AM No comments:

Our men in blue see a lot of stuff that nobody should have to see.
Posted by PooBahSpiel at 11:27 AM No comments:

Check out my Night of the Lepus movie review. The funny part was the stampede footage was obviously lifted from a much older generic cowboy movie. But, the movie did show what a threat giant bunnies pose to the world.
Posted by PooBahSpiel at 8:49 AM No comments:

Just why didn't they report how much rabbit scat was involved? Just what poses a threat, the amount of rabbit scat, or the radioactivity?
Posted by PooBahSpiel at 1:43 PM 2 comments:

It was pointed out to me that I might have missed a number in the sequence. Oops. Well, at least the story for this week is still in sequence. Honest, this IS the plan the government came up with for the radioactive planet poop.
Posted by PooBahSpiel at 6:53 AM No comments:

The Return of Stickman #1037 and The Comic Critic Reviews Zombieland

I saw this film with Elliot Trotter and several of his friends. Elliot is a co-founder of The Cartoonists’ League of Absurd Washingtonians, otherwise known as The CLAW. I’d hoped some fellow members of CLAW would also be able to make it, but it was just the small group of us. After the film, as we waited through the credits to see what sort of surprise might have been tacked on, we had the following discussion:

Radioactive rabbit scat. How come I'm the only cartoonist drawing about this? It's pure..um..gold?
Posted by PooBahSpiel at 5:32 PM 1 comment:

The Return of Stickman #1035 Columbus Day

I'm still looking for the true answer of which european landed on the continental United States first. Mainly so that I can blame them for everything bad that happened to those already living there.
Posted by PooBahSpiel at 2:11 PM 2 comments:

The 24 Hour Comic Challenge is where a cartoonist must conceive, write, sketch, and ink a 24 page comic book in 24 hours. Several comic book stores and cartoon related organizations organize this marathon to fall on one day each year. This year it was Saturday, Oct 3rd. The location was Comic Book Ink, my favorite comic book store in Tacoma. Amongst the other participants were my friends from The CLAW. 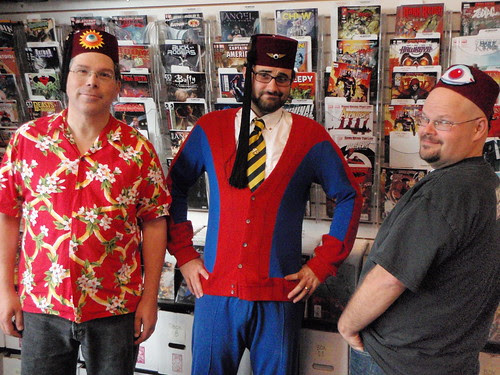 This is my story for this year. If you want to see the whole strip click here.

Posted by PooBahSpiel at 5:20 PM No comments:

Okay, maybe only the first half of this strip is true.
Posted by PooBahSpiel at 5:17 AM No comments:

Yesterday's strip offended a lot of pirates. Yup, pirates. That's the story I'm sticking with. Maybe Chinese pirates, but pirates none the less.
Posted by PooBahSpiel at 8:21 AM No comments:

My interest in movies is once again showing itself in Stickman instead of staying in The Comic Critic where it belongs.
Posted by PooBahSpiel at 2:17 PM No comments: