The Return of Stickman and Bonus Sketch from CLAW Open Swim

So many fans kept suggesting this news article that I finally buckled and did a strip about it. I left plenty of clues so that you can Google it down.

Last night was the CLAW's Open Swim. The theme for the evening was turning transformers into sexy she-bots. My contribution didn't come across as that sexy, but it sure explains a lot.

Posted by PooBahSpiel at 9:26 AM No comments:

The Return of Stickman #1288 - Rapture Edition

I could have done a whole week having fun with the rapture. Instead I'm going to pour my raptureness into doing a tshirt for a client using that them. I'm hoping that they will feel elated when they see it.
Posted by PooBahSpiel at 9:36 AM No comments:

Email ThisBlogThis!Share to TwitterShare to FacebookShare to Pinterest
Labels: rapture, The Return of Stickman

I can understand why the filmakers wanted to make Thor’s storyline as simple as possible. To introduce Nordic-myth-based characters is difficult if it’s not as trim and clean as possible. To serve up action, comedy, and romance, with just the right amount of sap poured over it is hard. I do think a lot of attention was paid to the details, but something was missing. My wife teased me—it was the lack of cleavage. Sure, Thor’s six-pack is all over the place, but there’s more rackage in When Harry Met Sally. My wife agrees with my rating, but has her own reasons. Like she said, “Hey, it’s in 3D!”

My good friend Joe Manfredini helped me man my table at the Spokane Comicon. This was my first time at this convention and I'm looking forward to coming back next year. A fire alarm went off during the event. The organizers quickly had everyone exit the building, and within minutes the fire department gave an all-clear. I had a chance to shoot a video while we were all outside.

Posted by PooBahSpiel at 6:30 PM No comments:

The Comic Critic Reviews The Horde

As a zombie-movie lover, I’m pretty happy with this find. Netflix has been very helpful, allowing me to view a wider array of foreign zombie movies. The UK, Germany, Netherlands, New Zealand, and Australia have all produced a fine batch of gristle and gore. I think this is my first French one. I’m looking forward to debating The Horde’s finer points and faults with my zombie-flick-lovin’ buddies.

Speaking of Zombie lovers, I just picked up my glow-in-the-dark t-shirts weekend at Post-Industrial Press. They look great! 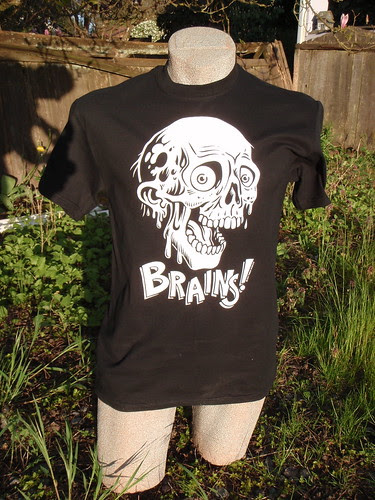 You can order yours today!
Posted by PooBahSpiel at 7:31 PM No comments:

The Comic Critic will be at Spokane Comicon 2011

Attention residents of Idaho, Montana, Lower Canada, and of course east of the mountains Washingtonians! The Comic Critic will be in the Artists Alley of The Spokane Comicon. Now is the time to get straight from the artist deals! And a much anticipated shirt will become available for the very first time. Details of the time and location of the event at spokanecomicon.com.
Posted by PooBahSpiel at 2:16 PM 1 comment:

I was stuck on a long flight with too much turbulence to sleep or draw. I’d seen all the other movie options, leaving me with Gulliver’s Travels. While the turbulence might have been the reason for my fellow passengers’ queasiness, it was this movie that made me nauseous.

This was a very busy weekend for me. Friday I went to Tacoma's 72-hour film festival, which was a blast. I skipped the wrap party because I needed my sleep in order to get ready for Free Comic Book Day. I had a blast taking my friend and neighbor, Pat Smith, to a couple of my favorite comic book stores. I would have tried for all of them in town but the I was worn out from the previous evening. I have a huge stack of comic books now. As soon as I'm done reading them I will be giving them to my nephews.
Posted by PooBahSpiel at 3:49 PM No comments:

The Return of Stickman #1285 and Behind the Scenes footage

What I really enjoyed about this news article was the last line.

Last week I had fun with my friends in creating a short film for the 72 Hour Film Festival. The screening is tonight. Here is some behind the scenes footage I took of this Safeword Film production.

Posted by PooBahSpiel at 11:31 AM No comments:

I want to thank John Markuson for sending me this news article. The strip practically wrote itself this morning. I also want to thank Adam J. Manley for his fine editing job on the latest video of me and Joe Manfredini talking about movies.

Posted by PooBahSpiel at 11:11 AM No comments: