The last time I put on a costume for Halloween was 1984. I've worn costumes since then, just not for Halloween.
Posted by PooBahSpiel at 9:43 AM No comments:

Email ThisBlogThis!Share to TwitterShare to FacebookShare to Pinterest
Labels: #1444, costumes, Halloween, stickman, The Return of Stickman

I promise this will be the last Justin Bieber laptop strip. At least for a while. I meant to include it in last week's theme and didn't get around to posting it until now. I've no idea of what I will post tomorrow as I let my buffer run out. My fans have been sending me in plenty of material. A lot of it involves stuff spilled on highways. But that might entail bringing back the buffalo and aliens again. Maybe I should do something Halloweenie.
Posted by PooBahSpiel at 8:29 AM 1 comment:

The Comic Critic Reviews The Cider House Rules and attends the Little Con of Horrors in Spokane, WA.

I didn’t get around to watching The Cider House Rules until 2001, long after I had added it to my must-see list after Michael Caine (one of my favorite actors) won an Oscar. The Cider House Rules also won Best Adapted Screenplay, well deserved when you consider that writer John Irving removed two characters, various subplots, and shortened the time span of the novel by 15 years. Anyway, at the time I was in the process of getting three dental fillings replaced. I also had some $1 movie rental coupons that were soon to expire. A movie marathon was just the ticket for getting my mind off everything that was happening in my mouth. Now this is the part where I tie in everything I mentioned about the movie. The $1 movie rental coupons reflect the thrift-focused time period of the movie. My dental work reflects the fear of dated and risky medical procedures. The Oscar win for Michael Caine reflects that my love for his work is justified. And I mentioned when I saw the film because I feel bad that I didn’t see it sooner. The Cider House Rules is a great film that touches on morality, law, idealism, pragmatism, and how the human condition (its emotion and frailty, combined with those odd little turns life gives us) can make us question it all.

On Sunday, October 28th I had a tables at Spokane's first Little Con of Horrors. I had the pleasure of carpooling over with Matt Youngmark. His company made the long hours of the trip there and back go by quickly. Link to photos of sketches drawn at the event here.
Posted by PooBahSpiel at 5:34 PM No comments:

The Return of Stickman #1442 and The Little Con of Horrors

This Sunday I will be in Spokane, WA attending the Little Con of Horrors. I'll be carpooling over with Matt Youngmark, creator and author of "Zombopacolypse Now." Matt and I often end up at several of the same book signings and comic book shows together. It only makes sense that we would carpool every now and then.

And now here is your next installment of the Justin Beiber Laptop saga.

Posted by PooBahSpiel at 8:49 AM No comments:

The Return of Stickman #1441 & The Little King of Thrones

Last night was the CLAW's Open Swim. The theme of the evening was to reboot one of your favorite cancelled cartoon characters. I grew up with The Little King. I loved how he remained silent all the time and most of the humor were visual gags. Also loved the simplicity of the line and how the king was always in profile. The strip pretty much ended when the creator died in 1975. I was shocked that nobody else in the room even heard of him. 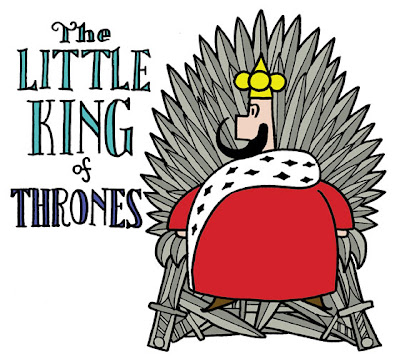 My fourth place prize was a boobing Jesus for the dashboard. The big winner of the event was Mark Bill with is Marvel spin-off character "Hoppy." Kudos for both obscurity and great reboot. And now back you your regular installment of stickman:

Posted by PooBahSpiel at 9:02 AM No comments:

Last Saturday I was at the Bellingham Comic Con

. If you would like to see some photos I took at the event then click here.
Posted by PooBahSpiel at 2:24 PM No comments:

The Comic Critic Reviews Lord of the Rings, The Fellowship of the Ring

I remember going to see the 1979 version of The Lord of the Rings with my brothers. My oldest brother Randy was a huge fan of Tolkien, as was I. My brother Cliff gave me a box set of the books for Christmas one year. I still have them. And I thought the movie was great. Just like my brother Randy I had great hopes that in a year or two we would be seeing the next movie. We all knew, just knew, that there was no way that The Lord of the Rings could be captured in just one movie. But our hopes dwindled as each year passed. Then I heard that Peter Jackson, yes, the same guy how made Bad Taste, was going to do it. Deep inside me, an old ember of hope for a great Lord of the Rings franchise, one that I thought died out years ago, blazed forth like the faith-blind zealot. It was going to happen! I was going to see it! And it was going to be glorious! Later I learned that Peter Jackson was inspired by the 1979 version. How could he not? It was pretty cool.
Posted by PooBahSpiel at 6:21 PM 1 comment:

Email ThisBlogThis!Share to TwitterShare to FacebookShare to Pinterest
Labels: Cartoon, fellowship, Movie Review, Ring, The Lord of the Rings, Tolkien

I was fortunate enough to vacation in Australia for three weeks. It was a wonderful, memorable experience filled with unexpected surprises, adventure, and enchanted evenings. Even before the trip, I enjoyed watching films from Down-Under. Australian films don’t try to copy Hollywood. (If anything, Hollywood tries to capture some of the magic that gets produced from the Land of Kangaroos. Too often Hollywood over-applies its well-known techniques in pursuit of a larger audience.) The reason I find Australian films so enjoyable is that they don’t worry about capturing a massive audience; they’re more concerned about the right audience finding them. Even though my wife and I stayed in Australia for nearly a month, it wasn’t long enough. We’re thankful when we can recapture some of our experiences through the movies they produce. And Siam Sunset is one of the best we’ve seen.
Posted by PooBahSpiel at 9:00 AM No comments:

Fans. You might have noticed a slowdown on Stickman strips. A large project is currently on my desk and will be distracting me for a few days. Stickman strips will Thursday.
Posted by PooBahSpiel at 6:43 AM No comments:

Email ThisBlogThis!Share to TwitterShare to FacebookShare to Pinterest
Labels: #1439, balloons, stuck in tree, taped, The Return of Stickman, turtle

Given the royalty-free status of the story, you might wonder why The Ten Commandments hasn’t undergone a slew of remakes. I can tell you why nobody is going to do a reboot of the book Exodus anytime soon: Cecil B. DeMille got it right. This movie is huge! With its huge stars, it tells a huge story, has huge special effects with huge sets and a huge cast. It easily found its way into the heart of a society whose motto is Bigger is Better and stayed there. It remains fixed as an icon because it was made with grit and sweat on a scale of size, quality, and excellence that would be nearly impossible today. A huge achievement back in the day, it remains one now. If you haven’t seen it, you must. Be sure to get the full-length version to enjoy all 220 minutes. Huge!

Can you complete the Ten Commandment Challenge?
Without looking it up on the Internet, or asking another’s help, can you write down the Ten Commandments in ten minutes? I used to go to the Mall and make this bet with total strangers. If they could do it, they would win ten dollars. In all the times I asked only once did I lose.
Posted by PooBahSpiel at 2:33 PM No comments:

If my work schedule allows me, I go down to Frost Park in Tacoma on Fridays and participate in a Chalk Off. The competitions will end at the end of the month as it will be too cold and wet. With today being sunny I wanted to get in as much sunshine as possible. Here's my contribution:

You can see all the other artist's work here.
Posted by PooBahSpiel at 4:00 PM No comments:

I forgot to post my strip for two days. So here is yesterday's and today's. I guess you can tell I'm working on a theme.

Posted by PooBahSpiel at 4:04 PM No comments:

Email ThisBlogThis!Share to TwitterShare to FacebookShare to Pinterest
Labels: #1436, #1437, road, The Return of Stickman, turtle

The Comic Critic Reviews Pirates of the Carribean: Curse of the Black Pearl, and the Tacoma Zombpocalpse

One summer my cousins went to Disneyland. I remember them telling my siblings and me about all the rides. I got very excited that there was a ride called “Pirates of the Caribbean.” My father was a huge Errol Flynn fan, and he introduced me to pirate movies via “Captain Blood.” Together, we spent countless hours watching sea battles and peg-legged pirates swinging cutlasses. So when Deborah, Diane, Dina, and Denise described this ride with animatronic (freakin’ robots) pirates, my overactive mind feasted on the imagery for months. In fact, I can’t remember any other details of their trip. I think their parents were there—maybe. Anyway, when I heard that Disney had turned the ride into a movie, that little part of my brain that got ridiculously hyper as a kid got all charged up again. I was one of the first to get a ticket to that ride, erm, movie, and I loved every minute of it.

And I know several of you are wondering how I did at the Tacoma Zombpocalypse. The answer: Fantastic. Not only was this great one day show, but it was their first show, and it has topped my sales for a one day show this year. Here is a link to a group page on flickr so you can see all the fun. Kudos to my friend, Joe Manfredini, for helping me out at my table.
Posted by PooBahSpiel at 10:25 AM No comments: