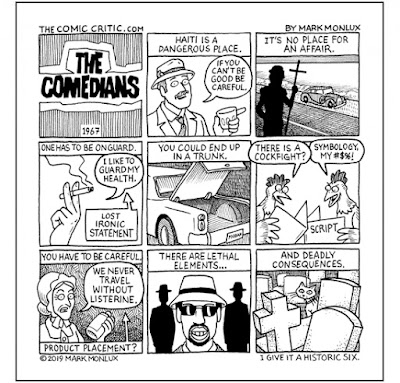 François Duvalier, also known as Papa Doc, was the president of Haiti when this movie came out. His was an extremely oppressive totalitarian regime. The Comedians had to be filmed in The Republic of Benin, then known as Dahomey, because filming it on Haiti would have been impossible. The Comedians is a political drama meant to illuminate the ever-increasing desperate conditions imposed upon the Haitian people. It was also meant to poke at the inadequacies of embassy relationships with a dictatorship. And it also has a rocky love story woven into its tapestry. The movie was filled out with an all-star cast, including the legendary Lillian Gish. Amongst the cast were several African-American actors whose careers would only get larger. The title The Comedians comes from the concept that everybody is on a world stage where lines are being crossed not so much for the humor of those involved but for the gods. The theme of everybody’s life as a dark and ridiculous joke is a harsh sentiment that makes for a great novel, but it might have made it a challenge for a wider film audience. Critics might have found mild grievances with the story, but nearly everyone agrees the performances were superb. A short documentary titled The Comedians in Africa, chronicles the difficulties the cast and crew faced shooting a politically charged film in an alternative location. Watching both the movie and the documentary on DVD made up for my original experience, years before, of watching a heavily edited television version.
Posted by PooBahSpiel at 10:02 AM No comments: